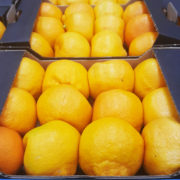 The first satsumas were picked last week in South Africa and the harvest will run for the next five or six weeks. Much of the South African satsuma harvest goes to the UK, which has a liking for the fruit, as well as to Russia and the EU.

At this early stage it looks good, even if the sizing might be a notch smaller than last year but fortunately UK supermarkets have a preference for small clementine’s for the purposes of bagging. “We’re excited about the harvest but much depends on temperatures during the coming month. Excessive heat can adversely affect our quality,” …. Boland (Western Cape).
Grower in the Eastern Cape, agrees that volume-wise this will be a normal satsuma year. “Size is a bit small but the internal quality is fantastic. We’re getting a Brix count of 9.5 to 10 which is good for early citrus. The satsumas are grown in the Gamtoos Valley which has a milder climate than the Sundays River Valley, a very good climate for soft citrus.” Their first satsuma consignment will go to Russia, but later consignments are destined for the UK. “The weakening Pound has made the UK a very difficult place, but to walk away from the UK would be a major mistake.”

There are a few reports of delayed harvesting, resulting in overlarge and puffy fruit in the northeast of the country, due to heavy and intermittent rain, but it doesn’t seem to be a widespread problem. Rain might also dilute the sugar content, but a few days of sunshine will set that right. Burgersfort area the internal quality and size look good. Hail in the area has caused some damage, but generally they expect a good season. They are trying to finish their satsuma harvest quickly, within three or four weeks, as it keeps being interrupted by the rain. In the Senwes region the clemenule and satsuma season will start this week, focuses more on Nadorcott mandarins for the EU and the Middle East and Novas for Hong Kong, China, Russia and the Middle East.

Clementines are due for picking from around 1 April and again, growers concur that this promises to be a normal season. However, a lot can still happen throughout the season. “There are more marketing options for clementine’s than for satsumas; they’re basically distributed to the entire Northern Hemisphere,” …. “Satsumas aren’t so sought after in the East.”

Clementines are not a major crop in the Eastern Cape; hybridisation between clementines and Nadorcotts is a challenge and companies choose to focus on Nadorcotts, of which they’re South Africa’s third largest producer. Last year they exported Nadorcotts to China for the first time (as well as to the EU, the UK, Canada and other parts of Asia). “China is a market we’re trying to unlock, something we should do now before the large volumes come onto the market,”…

There is concern in the citrus industry at the large expansion of late mandarin plantings – some say it’s a fivefold expansion. Boland wine farmers are converting vineyards and fruit processors are converting their stone fruit orchards to late mandarin orchards, because both those industries are struggling financially. Indications are that volumes may double by 2023, which will necessitate the opening of new markets.

The 2017 soft citrus season won’t be particularly affected by the drought as most growers still have adequate water supplies, but Western Cape growers emphasise that substantial rainfall during the coming winter is of the utmost importance.

Most South African soft citrus is grown in the Boland and the Western Cape, followed by the Eastern Cape, Mpumalanga (Nelspruit) and the Senwes region (Groblersdal and Marble Hall).

The South African citrus industry gathered in Port Elizabeth for the annual citrus summit last week, an event called very productive and valuable by citrus growers. The newest citrus estimates indicate a normal citrus season, with the notable exception of early navel oranges which suffered wind damage during blossoming and fruit set in the Sundays River Valley: class 1 oranges might be a rare commodity this season, causing an upward surge in navel prices.

Fieldfresh was established in 2007 with the directive of providing the finest quality wholesale produce, ranging from fresh crisp fruits, quality pre-prepared vegetables and tasty, uncut vegetables.